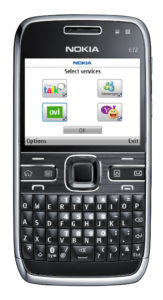 The E72 is the successor of the very popular E71 phone from Nokia. It retains most of the good things which the E71 had and improved in other aspects to ensure that the successor of the E71 can really replace it. I’ve been using the E72 as a primary phone for the past two weeks and have been taking it through it’s paces, from using GPRS/WiFi,  Push email, Twitter through Gravity, Music using Last.fm and more. One thing which impressed me on this phone is the battery life. Even though it uses the same battery as the E71, this phone goes a long way with it’s reduced battery consumption.

I had an E71 earlier and with the same usage patterns, it used to last for just a day or less. The E72 on the other-hand goes for 2, or on days with slightly less usage for 3 days before it needs to be charged. Nokia has managed to optimize the battery consumption on this handset and not at the cost of performance.

This phone flies with it’s speed. The interfaces are snappy and quick to respond even with all it’s special effects. I was able to run around 7 concurrent applications : Nokia Messaging Email, Mobbler, Gravity, Palringo, Advanced Call manger, Facebook Widget and Google Maps running at the same time, without having the phone freeze up or act slow at all. It’s the 600Mhz processor in action over here. 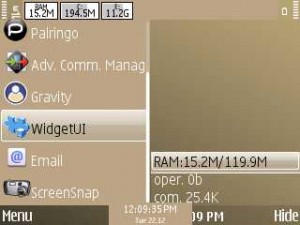 This phone’s also got a luxurious amount of phone memory available. This is a real luxury after using the cramped up, every reducing phone memory of the N97. The E72 came with more than 200MB phone memory free when I opened it out of the box. Even today, I’ve got more than 190MB free.

The camera on this phone is also one of the better in the E series phones. The pictures taken in daylight  are clear, and the ones in low light are slightly grainy, but not too much. This camera can’t compete with the N series phones with their Carl Zeiss optics, but it’s not a camera they slapped on in the last minute. You can take a look at some of the pictures from the E72 over at the E72 Photo set I created at Flickr. Pictures with the flash have a slight bluish tinge, but not as bad as the pictures from the E71 with the flash on.

Another cool addition to this phone is the torch. Keep the spacebar pressed long enough and the LED flash on the phone doubles up as a torch, which is quite bright to help you move around in pitch darkness. My only complaint about this functionality is you have to keep the spacebar kept too long to get the torch to light up. I liked the E63’s version better, where the torch came on just after a very short delay after being invoked.

If you type out  to a lot of sms, chat and emails, the keyboard layout of the E72 is perfect for you. Even though the keys are placed very close to each other, the keys themselves are designed so that you don’t hit the wrong key by mistake.

The E72 comes with Nokia Messaging built in, so you won’t have to go out and install a third party push mail client. In fact you can operate the mail as a pull or push email client. Having the push email functionality takes a hit on the battery life since your data connection will be switched on all all times. The regular pull mail client connects at intervals (or manually) to the server and fetches mails to your phone, so the data connection is on only when the email client is fetching your emails. You can choose which way you want your emails setup on the phone. I primarily used the Nokia Messaging client and have 5 email boxes delivered straight to the phone as soon and the emails hit my inbox. With push-mail on from 7am to 11pm, I still get more than 2 days off my battery, which is very good.

One feature which is overlooked by buyers of this phone is the Noise Cancellation technology incorporated in the phone. To enable this head over to the Control Panel> Settings > Phone > Call > Noise Cancellation. With this setting turned on, get to the one of the louder location in your office or area and try taking a call. You can hear the person on the other side of the call very well even in a noisy environment. This phone has a active noise cancellation technology built in which takes the sounds from the surrounding and effectively cancels it from the headset when you’re listening in closely. The call clarity (without the noise cancellation) is at par with the E71, so there’s nothing you’ll loose out there and I don’t have a 3G connection, so I can’t give you a comparison there.

If you’re a music buff, you can use your own hi-fi headset with the E71, since it sports a standard 3.5mm audio jack, and don’t have to depend on the bundled headsets. 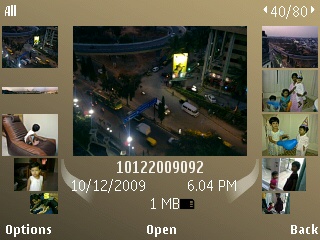 The image gallery application on the E72 is pretty cool with the images navigation rendered in a 3D cover-flow like animation. It’s fast to flip through and get a look at your photo collection.

The next article in this series is going to be about things I really think that the E72 could have done better with. So stay tuned to see if the E72 is the next phone for you.