In the first Lumia launch in India after the Nokia Mobile division acquisition, Microsoft Devices today launched the Lumia 630 in India. The Lumia 630 is the first device which comes with Windows 8.1 out of the box, and to top that off, it’s also the first Lumia with Dual SIM capability. The 630 will be available in India as two variants; the Dual SIM will hit the stores first at a best buy price of Rs. 11,500 and the single SIM version will be available later for Rs. 10,500. 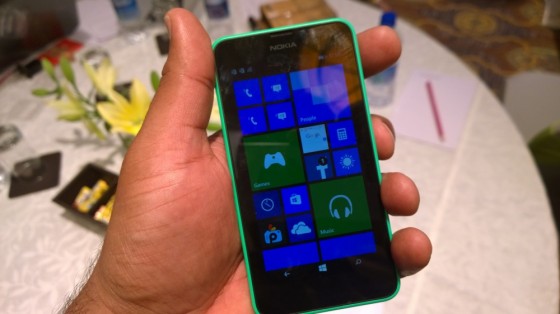 Quick specs of the Lumia 630

Highlights of the Lumia 630

The  Lumia 630 features quite a few firsts in the Lumia Range of phones. As we mentioned earlier, this is the first to come with Windows Phone 8.1 factory installed. So you get all the Windows Phone 8.1 goodies like the Notification bar, Word Flow Keyboard, Third Row of tiles on the home screen. Did you know that the Guinness Record holder for the fastest texting using an on-screen keyboard used a Windows Phone 8.1 device with Word Flow?

This is also the first in the Lumia range to ditch the capacitive button at the bottom of the phone, and feature on screen buttons. The good thing here is that you can customize the color scheme for these buttons now, as evident from the screen below. 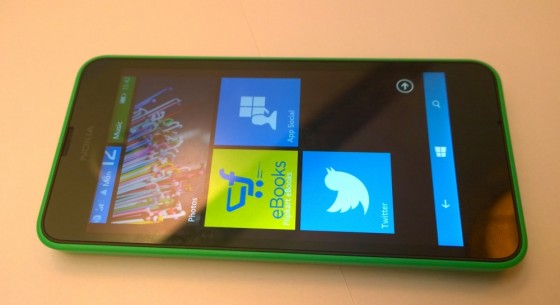 It’s also the first Lumia with Dual SIM capabilities. The 630 also comes with a new SensorCore which allows the device to track motion for health apps like Bing Health and Fitness. The SensorCore is very low powered and won’t take up much power at all even if it tracks your activities all day.

The Dual SIM features on the phone come with a Smart SIM feature allowing you give a custom name each of your SIMs. The Message and Phone call logs for both SIMs can also be linked to give you a single view of all your activities across both SIMS.

The Lumia 630 comes with a lot of features packed in at the mid-range price point they are launching the phone at.

Apart from these plus points, there are a few negatives which I would like to highlight. Not all may see these as negatives, but if you are a spec hunter, you’ll find them missing on the 630.