We got a hold of the Nokia Charging Plate a week back and have been using it pretty much most of the times at home with my phones. It’s transformed my daily charging ritual.

It’s just so easy to charge my phone these days – no more hunting for the cable and plugging the device – I just place the phone on the charger and it does its magic. It’s really convenient, since I don’t have to hurriedly disconnect a cable to answer a call or take the phone while going for a quick walk out. The light at the base of unit turns on to show you if the phone is actually being charged.

I’m now tempted to go out and pick up at least 2 more so I can have one handy at office and at my bed-stand as well. But there’s a catch, more about that in a bit.

In the Lumia range, you can charge the 920, 720 and the 820 (with an additional charging shell) with the plate. Since this product follows the QI wireless charging standard, you can charge any phone which follows that standard. So I’ve used this accessory not just with my Lumia 920, but my Nexus 4 charges off this without any problem.

As with all wireless chargers these days, the phone has to be placed on the plate in order to change it, and the DT-900 charges only one device at a time. I’ve tried hard trying to place both my phone to get them to charge together, but I wasn’t successful with my experiments. 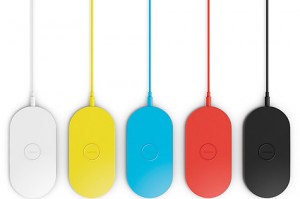 The DT-900 comes in 5 different colors so you can match your charger’s color to your phone or match the color scheme of your table.

Didn’t I tell you about the catch? Well the DT-900 is currently marked for sale at a premium cost of Rs. 3,999 here in India. That does put a dent in my plan to get a few more. Well since this is a premium feature, I guess the premium cost is kind of justified. Oh well, a few more months of saving to get one more is worth it considering both my phones are able to charge off the Nokia Wireless Charging Plate.

The DT-900 does cost a bit, but I’d happily pay for one just for the convenience and ease it offers, even my pre-school kids know how to charge the phone. I just ask them to charge up my phone and they go directly and place the phone on the Wireless Charging plate. This compared to an earlier attempt by my elder daughter to charge an older phone and ended up jamming the USB cable into the phone the wrong way.