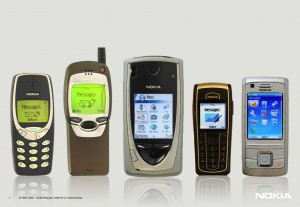 A few weeks back I was invited to meet up with the Nokia Design team in Delhi at the Digital Design Camp. During that event, Robert Williams, the Design Manager of Nokia Design Studio London, took up a session on Iconography, which was quite interesting.

Here’s a brief bio of Rob:
Name: Robert Williams
Title: Design Manager,
Nokia Design Studio: London, UK
Rob was originally attracted to design because he always liked creating things that get into people’s hands. Trying to understand people and how one can make things that improve or enhance their everyday lives is really interesting to Rob.

Favorite Nokia design and why?
Rob likes the Nokia 5800 XpressMusic because it was the first to have the new Nokia iconography he has been working on, and he likes the screen. He also likes all of the services and functionalities that are packed into such a small device, like email, Nokia Maps, Sports Tracker, and it is good at taking photos.

About his session
In his session Rob showed what challenges he and the team face with creating icons which are included in the phones. The problems Rob and his team face while creating icons is how do you convey the meaning of the icon to people across the globe? As the image above shows (click on it to get the bigger image), the icons don’t remain static once designed, they also have to evolve with time.

Take a look at the videos of Rob’s talk and see how they go about this.

Questions:
One of the questions I had for Rob was – “Why are icons placed in different menus on different phones? This does make it hard for users to find out where to get it”
The answer to this was that the icon placements depend on the function of the phone, for example the “Office” folder might be featured as a top level menu in the E-Series phones since it warrants it, but may be hidden under the Applications menu in the N-Series phones, since it might not be relevant to the target users of the phone.

Let’s end this post as Rob did by asking – Do you recognize these icons?

Keep an eye out, we’ve got more from the Nokia Design Team coming up during the rest of the week.