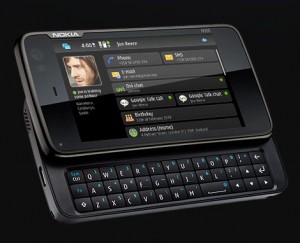 Nokia Releases the N900 - powered by Maemo on Linux

Amidst speculations running on the internet that Nokia is planning on moving from Symbian to Maemo, they’ve just officially released the N900, a Maemo powered handset.

This handset features a slide out QWERTY keyboard and is powered by a 600Mhz ARM Cortex-A8 processor. It provides 1GB of application memory and 32 GB storage which is expandable to 48GB through a Micro SD card. This should provide enough processing punch and memory to multitask applications on the phone.

The Web browser on this handset is powered by Mozilla technologies, the same technolog which powers Firefox browsers, so you can browse the web as it’s meant to be browsed instead of going though the mobile version of the site. It also supports Flash 9.4 so you can interact with flash applications and videos on the internet without any problems.

From Nokia’s press release on the N900 launch:

“With Linux software, Mozilla-based browser technology and now also with cellular connectivity, the Nokia N900 delivers a powerful mobile experience,” says Anssi Vanjoki, Executive Vice President, Markets, Nokia. “The Nokia N900 shows where we are going with Maemo and we’ll continue to work with the community to push the software forward. What we have with Maemo is something that is fusing the power of the computer, the internet and the mobile phone, and it is great to see that it is evolving in exciting ways.”

This device is slated for market release starting October 2009 and the expected price is a little above 500 euros, that around 35,000 Indian Rupees. We just hope that this device doesn’t go the N97 and dissapoint the masses. From the specs it looks like an impressive one, but we’ll wait and see how the device holds up to the public expectations towards it’s launch.

Complete Specs of the N900:

What´s in the box