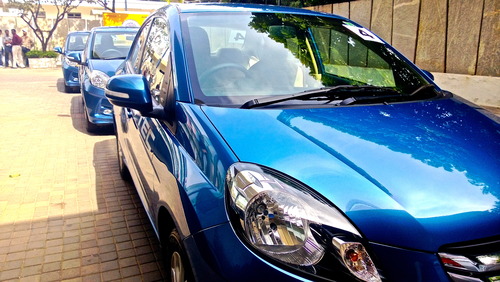 A few weekends back, team at @hondacarindia invited a bunch of us for a “Hang out With Honda” meet up, where a bunch of us got to meet up the Honda India Team in person and take the Honda Amaze out for a test drive.

After the presentations, the Honda team had arranged for a test drive for us in the Amaze. I was expecting a short drive around the block, but the team at Honda had actually planned out a 80km drive for us to get a feel of the car.

We flagged off from The Taj Vivantha in Whitefield, and drove out to the Narasapura stretch on the Bangalore – Kolar highway in groups of 2 or 3 people in six cars. There was a mix of petrol and diesel cars. The luck of the draw saw me in a petrol variant.

The route was well planned out giving us a mix of pothole laden, high traffic city roads and the wide open highways to try out the car on. What amazed me with the city driving was the way the Amaze handled the potholes and speed-bumps. The car went over them without any effort, making the ride really smooth.

The Amaze started showing us it’s power on the wide open highway stretches. The cabin sound insulation is really good, since I didn’t hear the engine noises at all till the car was touching the 80-100kmph mark. From what I heard from the folks who drove the Diesel cars, their experience too was the same.

The route was really a pleasure to drive in, taking us through some really scenic location which I missed out while driving in the hustle and bustle of Bangalore.

The Amaze is equipped with an Eco-driving indicator and a mileage indicator. The eco-mode lets you know if the way you’re driving is good for fuel economy. So making sure the indicator is on is a good way to save money on your fuel bills.

Our mileage on the drive ending up 16 + kilometers per litre, which could have been more if we actually kept an eye out on the Eco-driving indicator.

Coming to the interior spacing, the Amaze really has a huge amount of legroom. Even with the front seat rolled back so that I had ample legroom up front, the rear seat still had ample leg room to accommodate my long legs. Honda also advertised that the windscreen on the Amaze comes with heat absorption capabilities, which is a first in this segment of cars. This helps keep the car’s cabin a few degrees cooler during the hotter days.

The boot of the car also had an amazingly large space, which allowed us to fit in around 5-6 cabin luggages. That in fact was one of the competitions at the end of the ride, where one of the teams managed to win by cramming in 6 pieces of luggage into the boot in around 40-50 seconds.

The Honda Amaze starts up around 6 -9 lacs on road in Bangalore, inclusive of taxes, insurance and extended warranty. If you’d like more details and specs about the Honda Amaze is over here. Check out the prices for the different variants of the car using Honda’s pricing calculator here.