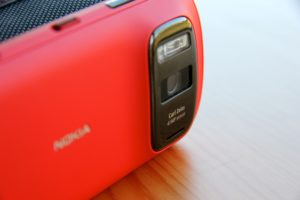 The phone which really blew me away during MWC 2012 was the Nokia 808 PureView with its 41 Mega Pixel sensor! The first monster camera phone announced in Nokia’s new PureView range of phones.

The 808 with its massive image sensor and Carl Zeiss optics is it self capable of taking great snaps. Nokia has also added their PureView software on top of this bundle so that pictures you take at 5 and 8 megapixel come out crisp and clear, even in low light conditions. This is done using technology called Pixel Oversampling where the information from many pixels (or dots in the image) are used to calculate one single pixel. This greatly improves the end quality of the image removing those white grains you see when you take pictures in low light. To read more about this technology, check this White Paper from Nokia explaining the PureView technology. 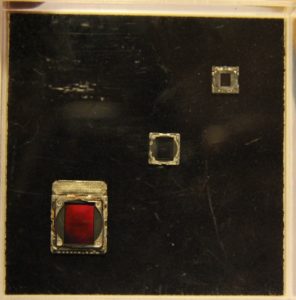 If you are wondering how big the Image Sensor on the Nokia 808 really is, check out the image on the right. As you’ve probably guessed, the one on the lower left side of the image is the sensor powering the 808’s camera. The one in the middle is a standard 8 Megapixel sensor. So the bigger the sensor, the more information about the photo it’s able to capture.

Apart from the Sensor and PixelView technology, the Nokia 808 is quite fast in switching to the Camera mode and clicking a snap. From the Lock screen, clicking on the Camera button got me to the camera in just a second and just over another second to click a snap. So in just over two seconds, your phone can go from the Lockscreen to actually taking a photo. I’m impressed.

The pictures and videos from the Nokia 808 were quite good for a camera phone. The phone excelled in the night shots pretty well. If you haven’t seen the sample pics and videos taken on the 808, head over to our previous post with the samples. Of course the folks from Nokia had stated that the phones we had to play around with were prototypes and not the actual devices slated for release, so they’d be tweaking the camera software a lot more before it’s launch around May.

The phone itself looks pretty good, check out the gallery here with the Nokia 808 posing for us.

What are your thoughts about the 808? Let us know by leaving us a comment below.