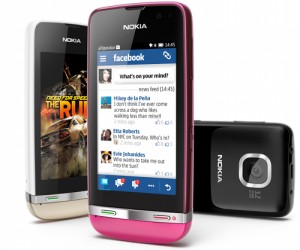 Last week, we covered the release of Nokia’s latest range of Asha phones. Luckily, while I was attending Nokia’s Strategy Sharing Summit in Chennai last week, I got a sneek peek at the Asha 311 in action, with some hands on time with the phone.  I wasn’t expecting this kind of performance out of an Asha phone! The new revamped UI of the phone is smooooooth! More on this later.

Let’s start with a quick overview of the phone specifications. The Asha 311 is a 3G enabled phone, with a 3″ touch screen display. Unlike the earlier Asha phones which were also 3G enabled, the 311 also features WiFi connectivity. The phone is estimated to retail around 92 Euros ( approximately Rs. 6500), before taxes, when it hits the stores.

As I mentioned earlier I wasn’t prepared for the new update to the S40 interface. Since the Asha 311 is a full screen touch device and has no hardware buttons for typing, Nokia has upgraded the S40 UI to a full touch interface. Even though I’ve reviewed earlier Asha phones with 1Ghz processors, this phone really takes the cake! Nokia’s done a lot of optimizations in the S40 systems to speed up interactions on the phone.

Most of the home screen interfaces are now swipe enabled, so all you need to do is swipe across screens. The latest version also features a notification bar on the top of the screen, for events requiring your attention. Even the volume display in the media player doesn’t just show you the volume level bars, but nice new animation! And did I mention that everything is so smooth? Since there’s not much more I can write about it which would do justice, check out the video to take a look for yourselves.

A video of the Nokia Asha 311 in action

For more information about the Asha 311, you can check out Nokia’s product page. Thanks to the Nokia India folks for letting us have some hands on time with the device and a demo for the video.